It took me 5 years and a couple of failed attempts to fulfill this dream-visit, but just sit and wonder how many times you have visited your “local wonder” lately….!!! How many times does a Parisian visits the Eiffel Tower, a New Yorker the Empire Sate Building or a Chinese the Great Wall? Same here…. I have only been on the Acropolis rock and visited the old museum once, when I was 12….. But after I left Greece, every time I am coming back I am craving for the same things; I am only craving to visit and study each and every historical and contemporary greek monument!! After all, i have never loved Greece as I love it now, that I don’t live here.. So yes, yesterday I visited the new Acropolis museum, but let’s take things from scratch…

The Old Acropolis Museum was an archaeological museum located in Athens, Greece on the archeological site of Acropolis. It is built in a niche at the eastern edge of the rock and most of it lies beneath the level of the hilltop, making it largely invisible. It was considered one of the major archaeological museums in Athens. Due to its limited size, the Greek government decided in the late 1980s to build a new museum. The New Acropolis Museum is now built at the foot of the Acropolis. In June 2007 the old museum closed its doors so that its antiquities could be moved to their new home, which opened on 20 June 2009.

Panoramic view of Parthenon and the two acropolis museums. On the left you can see the old museum, largely invisible from around the rock, placed strategically in order not to bother the view towards the ancient wonders.

Located in the historic of Makryianni district, the new Museum stands less than 1,000 feet southeast of the Parthenon. The top-floor Parthenon Gallery offers a 360-degree panoramic view of the Acropolis and modern Athens. The Museum is entered from the Dionysios Areopagitou pedestrian street, which links it to the Acropolis and other key archeological sites in Athens.
With 8,000 square meters (90,000 square feet) of exhibition space and a full range of visitor amenities, the Acropolis Museum tells the story of life on the Athenian Acropolis and its surroundings by uniting collections formerly dispersed in multiple institutions, including the small Acropolis Museum built in the 19th century.

The rich collections provide visitors with a comprehensive picture of the human presence on the Acropolis, from pre-historic times through late antiquity. Integral to this program is the display of an archeological excavation on the site: ruins from the 4th through 7th centuries A.D., left intact and protected beneath the building and made visible through the first floor. Other program facilities include a 200-seat auditorium.

Principal Design Features
Designed with spare horizontal lines and utmost simplicity, the Museum is deliberately non-monumental, focusing the visitor’s attention on extraordinary works of art. With the greatest possible clarity, the design translates programmatic requirements into architecture.
Light: The collection consists primarily of works of sculpture, many of them architectural pieces that originally decorated the monuments of the Acropolis, so the building that exhibits them is a museum of ambient natural light. The use of various types of glass allows light to flood into the top-floor Parthenon Gallery, to filter through skylights into the archaic galleries, and to penetrate the core of the building, gently touching the archeological excavation below the building. 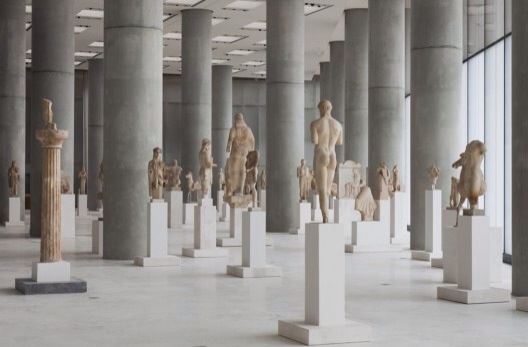 Circulation: The collection is installed in chronological sequence, from pre-history through the late Roman period, but reaches its high point (literally and programmatically) with the Parthenon Frieze. The visitor’s route is therefore a clear, three-dimensional loop. It goes up from the lobby via escalator to the double-height galleries for the Archaic period; upward again by escalator to the Parthenon Gallery; then back down to the Roman Empire galleries and out toward the Acropolis itself.

Organization: The Museum is conceived as a base, a middle zone and a top, taking its form from the archeological excavation below and from the orientation of the top floor toward the Parthenon.

The base hovers over the excavation on more than 100 slender concrete pillars. This level contains the lobby, temporary exhibition spaces, museum store, and support facilities.
The middle (which is trapezoidal in plan) is a double-height space that soars to 10 meters (33 feet), accommodating the galleries from the Archaic to the late Roman period. A mezzanine features a bar and restaurant (with a public terrace looking out toward the Acropolis) and multimedia space.

The top is the rectangular, glass-enclosed, skylit Parthenon Gallery, over 7 meters high and with a floor space of over 2,050 square meters (22,100 square ft). It is shifted 23 degrees from the rest of the building to orient it directly toward the Acropolis. Here the building’s concrete core, which penetrates upward through all levels, becomes the surface on which the marble sculptures of the Parthenon Frieze are mounted. The core allows natural light to pass down to the Caryatids on the level below. 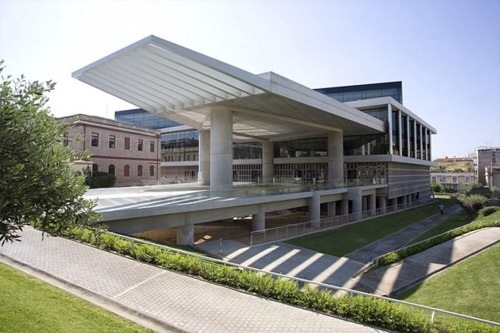 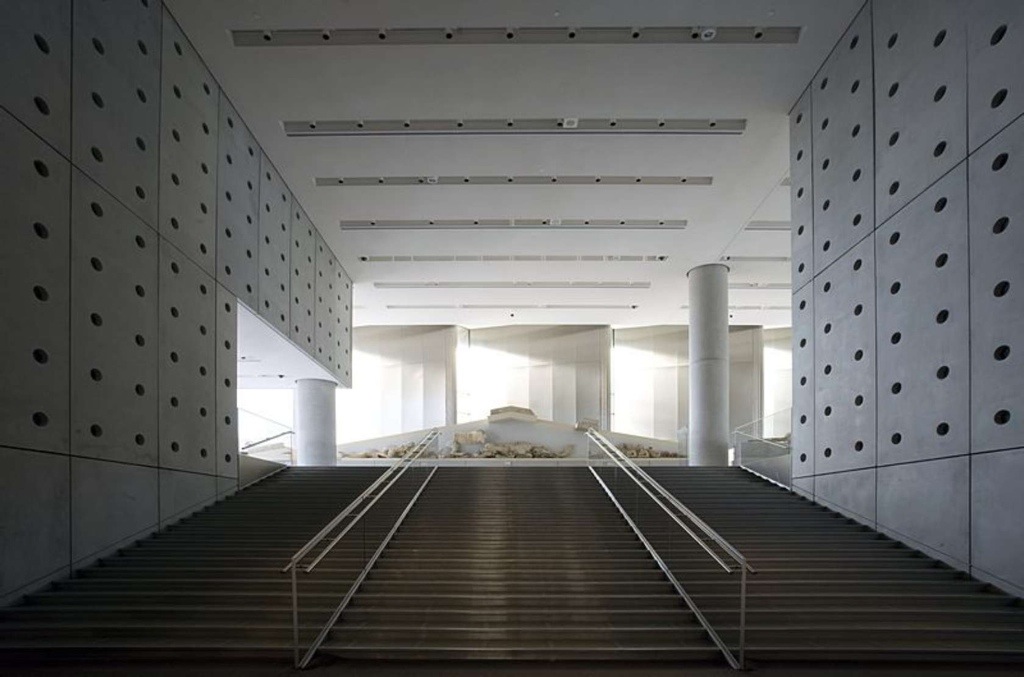 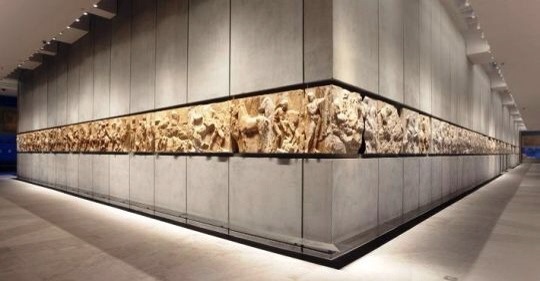 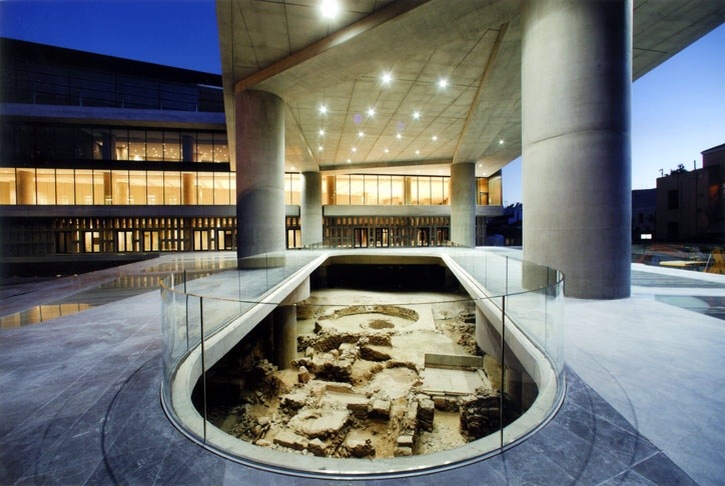 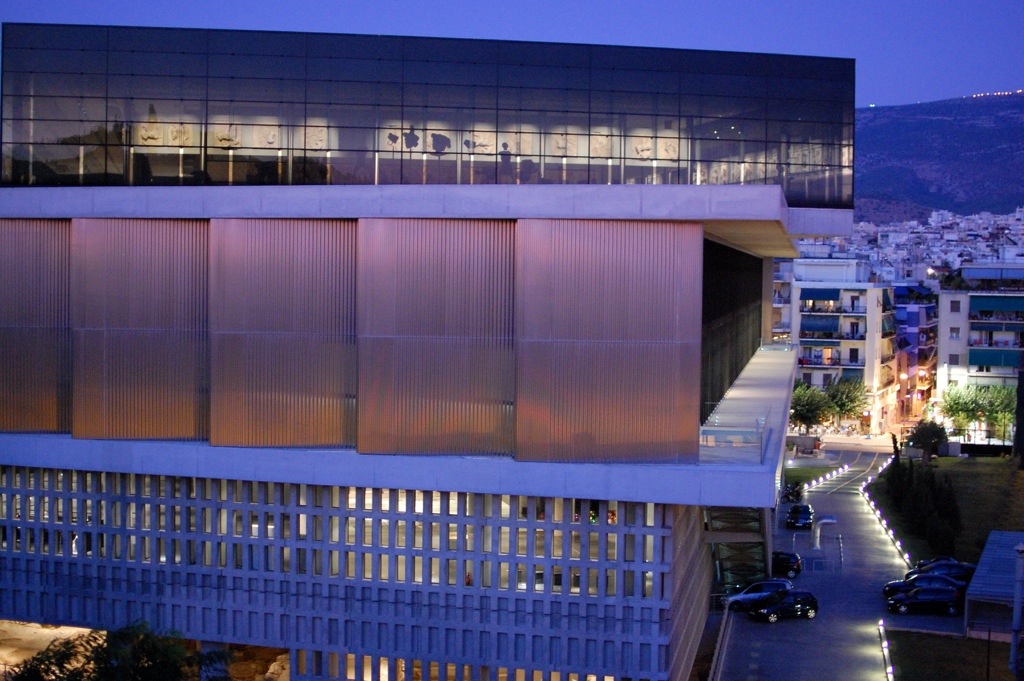 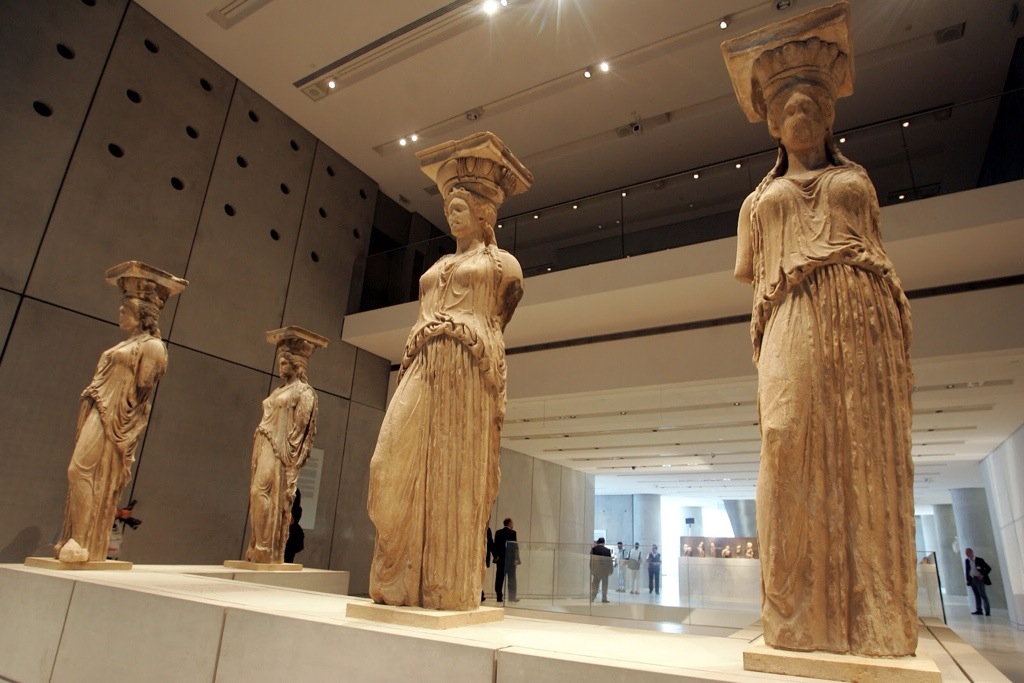 One thought on “My first time at the Acropolis Museum.”